We both settle for the normal breakfast today as we were saving up for lunch (the big meal of the day here).  It was a very sunny day and we headed back up the stairs and on the Central Park to view all the events and look for a new lunch spot.  A big parade was going though the Central Park area and everyone was in a great mood. 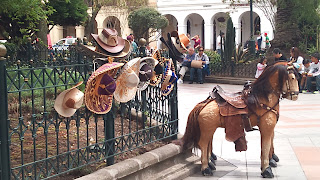 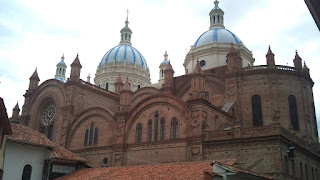 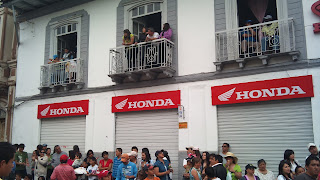 We looked through a market that contained beef, pork, lamb, chicken, fish, vegetables, fruit and grains.  It was very busy and most vendors were preparing the meats as we walked through.  We saw heads of pigs and lambs along with several other innards we don't plan on identifying.  A wonderful experience.
Gala got a little tired from all the walking and wanted to visit the French dessert restaurant I had read about.  I was not positive of the address just the name and we headed in what should have been the general direction.  After several blocks she was not impressed so I got her a nice spot on a bench to rest.  She asked a passing woman for directions and we were off to have lunch (the name of restaurant had changed but location was the same).﻿  We both had French cheese on a baguette and dos cerveza, por favor.  Gala finished with a chocolate crepe!
Then we were off to the Flower Market.  Leone's wife and daughter were having breakfast when we arrived this morning and they were going to the mall today to purchase some CD's of Ecuadorian music and offered to get us some if we wanted.  Gala had expressed her enjoyment with the music we had been hearing at the festivals and I gave her some money for the CD's.  Gala wanted to thank her for her efforts and we thought a living plant would be nice.  After purchasing a nice plant we met a couple from San Francisco who were in the process of settling here.  We laughed about our experiences and the need to learn more Spanish.  They are Gil and Deborah and their blog is http://castles-in-cuenca.blogspot.com/
We appreciated their ﻿advice and openness.
We ventured down a new set of steps further west, not so many and newer.  We arrived at the hotel, went to the terrace to enjoy the festival and cerveza.  Met a couple (Dennis and Mary Lynne) from Alberta Canada who were going to be here for two months and check out the area.  Then John stopped by to visit.  He's from Florida and considering a long-term decision to move here, if he does not go back to China.  Leone's wife and daughter arrived with 2 CD's and we presented her with the flower, everyone was happy.
Went to the INCA Lounge and Bistro for dinner (west of the stairs we descended today).  Gala chose the chicken tacos and a margarita and I went for the nachos con carne with cerveza.  Tacos were better by far.  Met some young men in Ecuador from USA volunteering and teaching locals north of Quito.  We walked slowly back to the hotel listening to the music of the festival and crowd noise (including an occasional car alarm).
Posted by Dennis & Gala at 9:27 PM No comments: